I didn’t know that you would sweep me off my feet and enthral my senses. Chopta, you were too gorgeous to be true. Cast your spell on us in the magical Himalayan monsoons.

Me and my husband were craving for some wilderness lately .I had heard about Chopta and its unique beauty but honestly never expected this kind of scenic verdure . I was more excited about carrying our own camping tent ,the summit hike to chandrashila and obviously the Tungnaath temple( the highest Shiva temple in the world).Got some camping essentials too.And the Excitement zoomed !

Wandering clouds swept a thin veil over the waterfalls in the backdrop of lush green meadows dotted with colorful wild flowers. These were my first impressions of Chopta as we got off the Jeep. Yes, I have been to Uttarakhand so many times but it appeared as if we were in some other part of the world. Its called the ” mini Switzerland ” for some reason that I now know. The entire zone is under the Forest Department and one can feel the purity due to the lack of commercialization and needless construction. So no fancy hotels, but yes some nice luxury camps.

It rained right from the time we reached Chopta, and I was apprehensive that it would dampen my excitement of pitching our tent on a solitary meadow in the middle of lush oak. We decided to stay in a tented camp accommodation which was rather plush inside.

The buffalo stared at my hubby from the tent’s window while he was brushing his teeth in the well-equipped bathroom and he gave it a friendly whoop.All he could see was the big nostrils peeking into the small mesh window. Yes, it was amusing and cute at the same time !

The trek to Tungnath was rather deserted with only a few devotees coming  back since we started a little late. We were actually waiting for the mist to settle and for views to open up. Raincoats, water bottle, some dry snacks and we were up on the drenched yet stunning trek. The view of the Tungnath temple was mesmerizing ( and relieving ) after a good 2.5 hours of hiking. Known to be built by the Pandavas 1000 years ago to recieve pardon from Lord Shiva for their act of killing their own kin in the Mahabharata.One can feel the sacred and blessed charm from the old solid granite slab structure as well the mystical vibes. A true spiritual experience !

What next ? Chandrashila hike ! We met only two other hikers. These young guys who would frequently stop for selfies and attempt to broadcast live videos but were also quite swift. All in swag. The feeling on the summit was exhilirating. One of the guys said ” You can probably lose your sanity in such an ethereal place”. It is believed that this is the place where Lord Rama meditated after defeating king Ravana. The clouds moved on and views were revealed for a few minutes. and then again. Hide and seek . 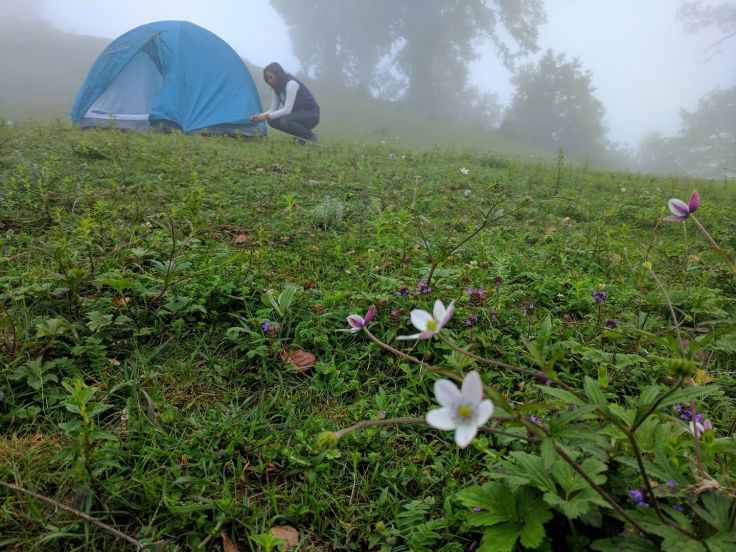 It stopped raining the next day and we could now pitch our tent. It was smoother than we had imagined. We chose a location  far out from civilization , quickly set up the tent and spent some hours inside . I slept a bit to the lullaby of birds chirping  and a soothing , caressing breeze.

I cannot emphasize how beautiful the hills look in the monsoons. You have to experience it to believe it. All you need is a raincoat and a sturdy pair of hiking boots. Avoid leeches as they suck ( pun intended ! ) .Not too harmful but not pleasant as well.